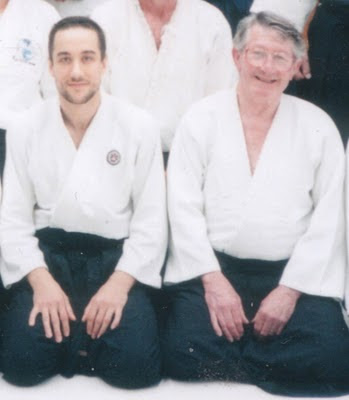 A few people have asked for a copy of the short eulogy I wrote fo Sensei Fosters memorial service this week. I was in two minds as this is a very personal piece, but I hope it conveys to everyone what a truly great man he was, and what a huge loss he will be to so many people, on so many levels.

According to one very ancient tradition, The Gods preserve humanity despite its many transgressions because at any one period in time, there exists 10 just and true individuals who, without being aware of their role, redeem mankind.

Haydn Foster was such a man. The impact he had on people around him was often so profound it’s fair to consider him a Force of Nature. One of the greatest joys in life is being lucky enough to cross paths with one of these extraordinary energies – one of the greatest challenges is adapting once the energy inevitably moves on.

Those of you here today will have many names the man we are saying goodbye to: Dad, Granddad, Sensei, Mr. Foster, Haydn and even “H”. To me he was always, and will always be “The Boss”.

On many occasions I heard him use the phrase “Be natural”. He explained this as an interpretation of O Sensei’s wish that we all “become one with nature”, but from his perspective he meant we should all try to be true to ourselves, and find our own paths, even if that journey was sometimes painful. Just before my family and I immigrated to New Zealand a few years ago, The Boss took me to one side and gave me a set of books, that I know were quite precious to him. Inside he had simply written “To Dunken, To help you find Your Way” with a capital Y and W.

Of the many successes of this man’s long and astonishing life, I would propose that aside from being a great husband and father, his major achievement was in helping so many hundreds, maybe thousands of people to set off down their own true paths. I was lucky enough to spend well over a decade travelling with The Boss, driving him around, making him tea, filling out airline embarkation cards, explaining that the nice lady at Osaka airport wanted to see his “Ticket” NOT his “chicken”, and of course being thrown around so much and in so many different destinations that after a while I began to think it was normal for the world to look upside down.

He was a great teacher: His level of understanding with regards to Aikido and how we as people interact was unsurpassed, and often the first lesson for us poor students was learning how to take the wisdom from his teaching.

He was a great role model: I watched him deal with many difficult situations over the decades and he always somehow managed to find a solution that worked out for the best.

..and he was a great magician: on more than one occasion I remember seeing him make at least 4 pints of Guinness disappear at lunchtime.

I spoke to The boss about a week before he left us, and he talked enthusiastically about the forthcoming Winter School and About Summer School in August, which some of us from here in New Zealand are planning to attend. He was very keen that the continued sharing of knowledge and fellowship within the organisation should grow and prosper. It is a mark of the modesty of the man that he even said he was keen to see “what tricks I’d picked up since I’d been away” which made me laugh as he has clearly forgotten more about Aikido than most of us will collectively know in our lifetimes.

His legacy is enormous and those of us remaining now have a responsibility to carry on, with his great spirit steering us. I regret deeply not being able to be with you all today to say goodbye personally and raise a few glasses, but two trips to the UK for us simply were not possible.

After a long talk with Paul we decided that The Boss would have much preferred that we supported Summer School, the highlight of the training calendar, and the place where we all have the most chance to study and develop the lessons he has left behind.

So on a personally note, I’d just like to say “Goodbye Boss”. Goodbye to my teacher, my friend, and to the man who for over half a century has quite simply been the soul of British Aikido.

I have no idea where you are now, but I know you’ll be making, wherever it is, a better place.