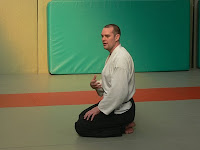 For those of you that don’t know much about sensei Adam Cooper, he was an amazingly positive, intelligent man who was loved by everyone that came into contact with him and was one of those very rare, intuitive “natural” martial artist – a truly great Aikidoka, who if not taken away from us so early would without question gone on to become a NZ Legend.

Adam was one of those people that made the world a better place just by existing and we will all miss him terribly – he trained with anyone and everyone and it was always a joy when he popped up at your dojo as you knew the energy on the mat that night would be terrific. Adam leaves behind him a huge hole in the NZ Aikido community.

Please go to the tributes page on Facebook for a bit more background on this great man, and it’s well work checking out his 4th dan grading videos 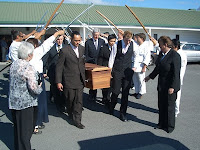 At Adam’s funeral on Monday, the guard of honour was made up of Aikidoka from all over New Zealand, from many different styles and organisation – a tribute to the impact the man made on everyone who trained with him.

There were many things said during the service about this lovely man, but the one moment I found most touching was this poem read by Adam’s father:

How to observe the flight of an arrow by Paulo Coelho

The arrow is intention projected into space.
Once it is fired, there is nothing left for the archer to do except accompany its path towards the target. From that moment on, the tension necessary for the shot has no more reason to exist.

The archer therefore keeps his eyes fixed on the flight of the arrow, but his heart is at rest and he smiles.
At that moment, if he has trained enough, if he has managed to develop his instinct, if he has maintained his elegance and concentration throughout the whole process of the shot, then he will feel the presence of the universe and he will see that his action was fair and deserved.

Whoever passes by and sees the archer with his arms open and his eyes following the arrow will fancy that he is stopped. But the allies know that the mind of the one who fired the arrow has changed dimension and is now in contact with the entire universe: the mind goes on working, learning everything of a positive nature that the shot has brought, correcting any mistakes, accepting his qualities, and waiting to see how the target reacts when it is struck.

When the archer stretches the string, he can see the whole world inside his bow. When he accompanies the flight of the arrow, this world comes close to him, caresses him and makes him relish the perfect sensation of having fulfilled his duty.

A Warrior of Light, after fulfilling his duty and transforming his intention into gesture, need fear no more: he has done what he had to do. He has not allowed himself to be petrified by fear, for even if the arrow fails to reach its target, he will have another opportunity, because he has not been a coward.

Having fought against cancer for the best part of half a decade, never losing his smile and training right up until the end, I can truly say I’ve known a Warrior. RIP mate.