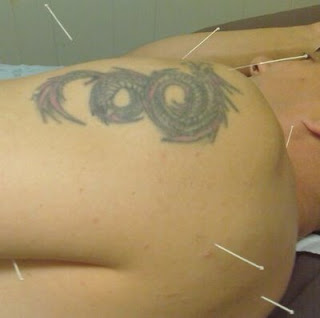 About a year ago, I damaged my shoulder during a training session. The details of the incident escapes me now (something to do with shiho-nage..), but for the last 12 months I’ve been to doctors, taken painkillers and anti-inflammatory drugs, seen an osteopath, a chiropractor and had three ‘complete’ 10 week treatments with three different physiotherapists.

And it still hurts.

I can’t bear my weight on it, so pull-ups and chins have disappeared from my exercise routine, and even the gentlest of sankyo/nikkyo/yonkyo pins leaves me twitching like a fish. I have it on very good authority that I have a torn rotator cuff and something else which I can never remember to do with an AC joint.

It was purely by chance that a friend of a friend recommended yet another Physio, saying that she had helped with a similar injury. By now I was ready to try anything, so I made an appointment and dutifully rolled up on time, expecting the usual manipulation and ‘Theraband‘ rehab exercises. I lay down on the couch and she wiggled my arm around a bit and then said “Hang on, I’ll go get my needles”. “Sorry? I asked. “Needles” said she “You have come for acupuncture I’m assuming?”. I hadn’t, but if there is one thing Aiki teaches you it’s to roll with whatever life serves up. “Errr.. yes. No problem”.

5 minutes later I looked a bit like a porcupine with alopecia (see photo), or maybe a poor relation of that “pinhead” guys in the Hellraiser movies. She explained that not only did she need to get the blood flowing into the area that was injured so it could heal, but that the muscles around it had been protecting it for so long that they had set solid, so she needed to loosen them up too. In total there were 21 needles sticking out of me, starting between my toes and finishing in my neck.

The next bit is odd. I fell asleep. In the middle of the day, in a sunny room filled with traffic noise and the hubbub of the rest of the clinic through plasterboard walls I somehow managed to doze off. I was awakened by a slightly amused therapist telling me that it wasn’t uncommon for people to react like this and that it showed she’d “shifted some energy”. As she “un-needled” me, she explained that acupuncture worked by re-directing energy, and removing blockages. ‘re-directing energy… removing blockages’. Hmmmm… that rings a bell!

The more I thought about it, the more comparisons I could see between acupuncture and Aikido, both in a practical, physical, philosophical and physiological sense.

Practically, both systems are based upon sound physics. The bio-mechanics present within Aikido only function with an understanding and the cor 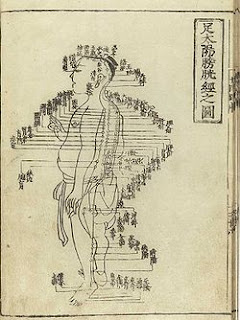 rect application of the principles of leverage, force and inertia, and acupuncture relies upon stimulation of certain areas of the body which in turn affect it’s energy flows. Cause and effect if you will.

Physically they both treat the body and it’s place within the universe as a holistic, homogeneous receiver, generator and transmitter of energy. Philosophically, we touch on a key factor for me. Both Aikido and acupuncture ‘work’. There are many studies which say that there is no clinical proof as to how acupuncture can treat ailments such as insomnia, diabetes, migraines, fatigue, even some cancers, but about a fifth of the population of this planet believes in it enough for it to be the mainstay of their health care system.

Similarly, Aikido has always had detractors, citing in-effectiveness in combat, no MMA aikido champions (!), no ‘real’ sparring within the syllabus (etc…) but if you look at most military close combat training, Police arrest training and most ‘self-defense’ courses, you will see a mix of jujutsu/Aikido in them all.

Acupuncture treatment regulates the flow of Qi (Ki) and Blood, fortifying where there is deficiency, draining where there is excess, and promoting free flow where there is stagnation or blockages. In a nutshell, the acupuncture approach is “no pain, no blockage; no blockage, no pain.” Similarly, an Aikido fundamental is to “remove blockages” whether that be via re-direction, conflict resolution or even use of atemi.

uncturists use disposable stainless steel needles of fine diameter (0.007″ to 0.020″, 0.18 mm to 0.51 mm), sterilized with ethylene oxide or by autoclave. These needles are far smaller in diameter (and therefore less painful) than hypodermic injection needles since they do not have to be hollow for purposes of injection. The upper third of these needles is wound with a thicker wire (typically bronze), or covered in plastic, to stiffen the needle and provide a handle for the acupuncturist to grasp while inserting.

The size and type of needle used, and the depth of insertion, depend on the acupuncture style being practiced. In my experience some of the needles made me jump a bit initially, others were completely painless but then started to throb or “wake up” a bit as the point was stimulated. None of them can be described as being ‘painful’, although I have since compared notes with other patients and they have reported the occasional needle being very uncomfortable, in most cases though this fades during the treatment.

Have done a trawl of Google for “Aikido+Acupuncture” I was surprised to find very few article or websites that link the two, considering the obvious commonality. I was interested to see that MASAHILO M. NAKAZONO one of the Japanese Sensei that introduced Aikido into the UK was a practitioner of acupuncture. Nakazono sensei was responsible for awarding my sensei, H W Foster (now 7th dan) his nidan back in 1962 and was instrumental in establishing the “form system” within the syllabus of the pioneer clubs of british Aikido.

I am sure that there are many Aikidoka / Acupuncturists out there, and I’d love to get more insight into how these two fascinating Arts ‘blend’. Comments please!