AIKIDO and the Daruma doll 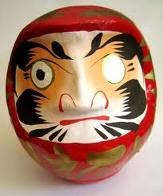 A nice little articoe written by my Friend Nick Engelen

During a summer seminar we lined up for bowing before sensei for the afternoon session. Sensei had a small red egg-like figure next to him. After bowing sensei explained that because of the heat we would take it a bit easy and would do some study on philosophy first.

I was curious about the doll and was to inpatient to wait for the sensei to start about it so asked: ‘What’s that red doll for sensei?’

Sensei smiled and said: ‘It’s a Daruma doll, Daruma is the Japanese name for Bodhidarma, the Zen Patriarch who meditated in a cave for nine years. Legend says he is the one who taught the Shaolinmonks Gung Fu.’

After a brief pause he went on: ‘In Japan these dolls are used when people do a wish or start a project. As you can see the eyes are left empty so people can fill one eye when starting a project and fill the other when they reach their goal.’

‘It also has a heavy bottom which makes it bounce up again after being pushed over sensei said while demonstrating this.’

‘During morning class I saw many of you struggle with technique and during break some of you had conversations about struggle in daily life. But remember your first steps how many times you fell to the ground and got up again to try again. Also when learning how to ride a bike. This Daruma doll shows us that no matter how many times it’s tipped over, he will bounce up again. Nine times down, ten times up. Budo is often translated as “martial way” but Bu is also commitment, not giving up, fighting the good fight…

So my students keep practicing no matter how difficult the technique may seem. Let’s line up, do a warm-up and do some physical work.’