AIKIDO AND THE FIGHTING MIND 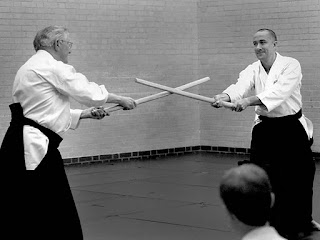 This article was passed onto me via our club Facebook Page.  I am unsure of the source – if anyone knows please drop me a line so I can credit it accordingly.


FIGHTING MIND
The instant you “touch the sword”..sense danger, you “fill yourself with the intent to cut down the opponent”. This and NOTHING more.

When we come under threat the mind may become vulnerable to what in Budo are called “sicknesses”. Fear,confusion,hesitation..even anger or carelessness.

The term “fill yourself” rather than fill the mind. Advises that you should have only one “thought” and that is ATTACK. There is no pre-conceived strategy or technique, the belief being that the attack and action are instantaneous .Both the fighting spirit and the body must be “relaxed but allert.”

Basic principles of moving off line and inside the line of attack should be trained time and again until they become as instinctive as possible.

KUDEN
Attack at all times leaving no openings in timing or distancing that the opponent may use.Destroy his will to continue.

This is the mindset of self defence there is ONLY an exlosive attack with no thought of defence or danger simply an application of fundamntal principles as swiftly and powerfully as possible.

This is most difficult to apply in a “competative” manner as no competition is to be allowed to the opponent. If two experienced martial artists should “compete” in such a manner BOTH are most likely to be injured.The outcome of a real confrontation is decided in the first few moments.

The “techniques are too deadly for competative arts”.

I have no time at all for such remarks, too often they are spoken by those who have NEVER competed or trained against resisting opponents.

I would encourage everyone to crosstrain in a competative art simply for the experience and to gain the respect for that art which I assure you will follow.

Attack at all times is approached using the principle of ENTEN JIZAI which means attack and defence are one. This shall be discussed later.See photos which show the enten jizai principle of the body alignment which evades the attack at the same instant carry an attack to the opponent. The sword/spear principle and empty hand principle is identical.