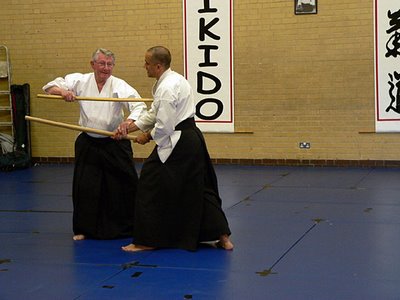 “When it comes to aikido – we are all beginners…”
Aikido, Aikidoka, Technique, Discussion & Debate, Free Photo’s & Video Clips, Cartoons, and a few Bloody Awful Jokes…..
I’ve just moved to Auckland, NZ, after spending most of my life living and doing Aikido in London UK. Everyone over here is very friendly (one of the reasons I moved!) but I’m still feeling a little”disconnected” and a blog seemed a cathartic process whereby I can think through, albiet in public (cyber-public?) the latest chapter of my Aikido journey. Who knows, it may even get read by someone…

Aikido time line…
I started Aikido when I was 10 years old. My family moved from SW London out to the dge of West London, and it just happened that, at the end of the road, there was a tatty old wooden building behind a pub, little did I know at the time that this was the infamous “Hut dojo” the birthplace of Aikido in the UK.

To get myself and my little bruv out of the house, we were promptly dumped there on a saturday morning for our first aikido class, which, to our joy involved throwing each other about and trying to roll around the floor, which is basically what we’ve have been doing at home anyway!

To cut a very long story short, after about 2 years my brothers hormones kicked in, be became large, and started playing rugby at school, whilst I, always the more “artistic” type, kept at the Aiki.

I drifted, as do so many, during my teen years – left home at 16, toured with a rock band, got into lots of trouble, got out of some of it, went to art college – the normal stuff; but by my 20’s I was drawn back, like a pile of unorganised iron filings to a irresistable magnet, to the hut dojo, and Aikido.

The hut was originally an army building, I believe used a billet and perhaps a temporary admin building during (both?) wars – and when I started in 1974, it was leaky, falling apart, had plantsgrowing through the windows and walls, only one of the windows opened, and there were straw tatami mats. Not nice, safe, Health & Safety Approved foam Judo mats. Japanese straw-filled floor mats. The wooden floor was a wreck to, and over the years various attempts had been made at re-inforcing it to put up with the contant crashing of bodies. The great, late Sensei Ron Russell (another reason, indirectly, that I’m in NZ now…) on several occasions crawled underneath the building to prop up the floor with beer crates, railway sleepers and piles of bricks….

So – the floor was variable. You either landed on a rock hard area which loosened your teeth upon landing, or on a springy bit which shot you almost back on your feet. Over the years I learned to change my trajectory, mid-flight, to miss the hard bits. Even to this day, if you meet a shodan from the Hut, if nothing else they will have a great ukemi!

Kenshiro Abbe Sensei, by all accounts an astonishing martial artist (he taught about 6 disciplines I believe, a real “Budo” man) first brougt Aikido to the UK, and taught a handful of people at the Hut dojo in the mid to late 1950’s. One of these was Sensei H. W. Foster 7th dan. Now in his 79th year, he is now head of the Institue of Aikido worldwide, and still regularly teaches at The Hut dojo, and only a few weeks ago, flew all the way over to Auckland to do a 4 day seminar. I have been privileged to have been his assistant for the best part of a decade whilst training at the hut, and can safely say that of all the many senior instructors I’ve seen over the years, he still has something that puts him apart. Not bad for a man who lost a lung to pleuresy in his mid 20’s.

I remember one evening, he turned up to the club unexpectedly as he’s been off with a chest infection so I assumed I’d be taking the class. It was a typical January evening in Londaon, bloody cold and wet. There was condensation on the mats from the hot bodies and everyone was slipping around. “The Boss” as I’ve always referred to him, turned up and said “you carry on, I’m going to go and get changed – I want to have a go; try to get myself going a bit”.

20 minutes of Koshi-nage (hip throws) later I felt like a lost suitcase that had done 6 weeks of Heathrow Airport baggage handlers. When the clas was finished, we went for the traditional after-session “rehydration” (The Hut dojo is so called, because it is behind a very old public house, called – wait for it – The Hut) and he apologised for wearing his socks on the mat.. There we all were, slipping about like idiots whilst this retired gentleman threw us about like ragdolls – and not one of us noticed his blue socks!

There is a lot of mis-representation about Aikido, especially from the viewpoint of other martial arts, and from the general public whose only experience of Aikido is Steven Seagal movies.
As mark Twain once said:
“In religion and politics, people’s beliefs and convictions are in almost every case gotten at second hand, and without examination”.
The same unfortunately can be said of Aikido. My advice to everyone, young or old is
Try It For Yourself. There is something in Aikido for everyone.

I was lucky enough to have taught the beginners class at The Hut for nearly 10 years, and after lots of “what book should I buy?” questions and many attempts at photocopying articles/website for the students, I decided to write a book. It’s only small, but it covers everything I wish I’d been told in my first year. I’ve made it intentionally non-style specific, so it doesn’t matter if you are traditional, Tomiki, Ki, Yoshinkan etc – the basics are pretty much the same.

I’ve kept it as cheap as possible, and I only make enough profit to keep it being printed. if you run a club or teach I’ll gladly supply them as a teaching aide at cost price.

My main aim is to spread Aikido to the world, as I genuinely believe it makes it a better place to be.

please visit my website for info on the book,

and feel free to download any of my video clips

also check out the following Aiki websites:
www.aikido.net.nz – Kyu Shin Do Aikdio, Auckland
www.ioaikido.co.uk – Institute of Aikido UK
www.worton.com/bac/ – Broadland Aikido club UK
www.phoenix-aikido.com – Yama arashi Aikido club UK
www.acgi26.dial.pipex.com/whiteoak.html – White Oak Aikido UK
Let me know if you’d like your Aikido site added to this list or if you want to swap links.
Thanks for taking the time to read this blog, and I hope it makes you want to find out more about Aikido
www.aikido4beginners.co.uk