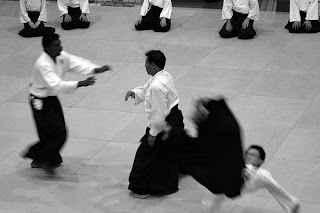 Taken from my good friends at the Kororo kai Aikido Dojo’s FB page.


Multiple attack should be seen as an ambush therefor the intent should be to move off line mount a superior attack to allow escape.

Do NOT engage multiple attackers. Aikido tai sabaki body alignment and evasion should give you the moment to make an escape.  At best you may be capable of unbalancing the first attacker and throwing him toward the other.

BUT your main concern is to escape.

I tend to disbelieve the idea that as a martial artist you shall be able to engage multiple opponents and defeat them.

Tai sabaki means BODY movement it does not mean foot movement or stances.

Aikido is a triangular art and the alignment of the hips into kuzushi is a fundamental principle. The HIPS are moved and the feet move naturally beneath them, Since one hip is forward this creates the triangular posture (kamae not stance)
There are NO stances in aikido.

Indeed there are no stances in any of the Japanese arts at a higher level ALL movement and balance are natural.