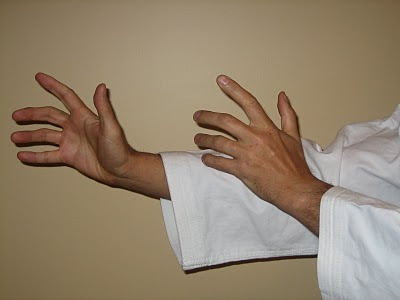 A nice little piece by Nick Engelen from Holland.

Once in a while we focus on self-defence. Most of the classes focused on the practise of the martial arts and now and then we mixed both traditional martial arts teaching with practical applications. This was going to be one of those classes.

In the changing room we all changed quickly and most of seemed upbeat and excited apart from Tony whose mind seemed far away. Rob asked: ‘What’s up Tony? You seem quite…’

Tony looked up as if awakened from a dream and answered: ‘Some situation at work.’

Rob said: ‘Man up Tony, take some distance you aren’t at work now and you shouldn’t take things at work personal anyway.’

As Tony described the situation many people gave their opinion about what Tony should do and how he should be mentally stronger.

Sensei who had kept quiet and just listened was the first to leave the changing room on his way to the dojo where after most people that were ready followed. As soon as everybody was ready we bowed in and training started.

We were training at some technique. I was partnered up with Rob with me attacking and Rob executing the technique. After every execution of the technique Rob stepped back taking the correct distance from the opponent.

Sensei came over and said: ‘Try it from a closer distance’. When I moved a bit closer to shorten the distance Rob’s face showed a bit of discomfort as if he wasn’t that confident any longer. I attacked and Rob deflected my punch a bit but got his face out of the way of my punch only just in time.

The rest of the technique was mediocre under the pressure. ‘Again’ Sensei said. So I closed in again where after I attacked with a strike to his head, nearly hitting him before he finished the technique.

Rob seemed exhausted after performing the technique only two times. Looking around I noticed everyone had stopped training and was observing what was going on.

Sensei said you see, one big difference between what we do here and what happens on the street is that we have a lot of distance here which allows us to keep a good overview of what’s happening and allowing us to see what’s going to come next. In reality we don’t have that distance, we don’t have much time to react, we don’t have the overview, we experience pressure and discomfort we have difficulties with predicting what will come next…

Now Rob at least knew what was going to come. Do you want to try free style Rob?

Rob shook his head. Sensei smiled: ‘I already thought so.’ ‘This is what we also see in reality, once in the middle of a situation you feel like being crushed and having no good overview of what’s exactly happening, Often it’s hard to take distance. For people on the outside they have a better view and often don’t seem to understand why ‘the man in the arena’ as Roosevelt put it is so stressed out.

With this understanding we also see that when Roosevelt said it’s not the critic who counts was right. The only thing we can do is getting comfortable with the discomfort and learn from it. So I suggest you all become men and women in the arena now by closing in on your partner and do this technique again.’