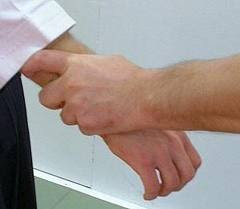 ‘When I trained in Iwama under Morihiro Saito Sensei many years ago, every so often he would say something like, “Sunao ni keiko shite kudasai” (Practice with an honest mind) to admonish students to practice sincerely and in a spirit of cooperation. An example would be when he saw a student resisting another’s attempt to perform a technique using his foreknowledge of the technique being practiced. Let’s assume that we are practicing tai no henko. I know that uke will be pivoting to the outside while extending his arms in front of his center.

Instead of merely grabbing his hand firmly, I lift it up forcibly to prevent him from turning and executing the technique. What I have done is simply to take advantage of the prearranged nature of practice to thwart uke’s attempt to perform the technique. I am not being “sunao” or honest in my training. Such an action on my part would be entirely self-defeating and a show of disrespect to the teacher. If I were to lift uke’s arm upward in tai no henko, he could simply continue the upward movement and swing his arm towards my face to throw me down.

The following was a true story that occurred at the Iwama Dojo many years ago. I was practicing with a strong partner. Every time, he would use his knowledge of the technique we were practicing to block my movement. This of course was a cause of frustration to me. To make a statement, I proceded to block his technique in the same manner, but only once to prove a point. He continued every time to stop me, and from then on, I just resigned myself to continue until the end of class vowing to never train with him again. I knew that Saito Sensei was watching us as we continued in this manner, and I saw him becoming upset out of the corner of my eye.

Finally, Sensei shouted, “Dame! So iu kudaranai keiko yamero!” (Stop that stupid training!). We all sat down while Sensei exploded at my partner. He explained that anyone can block a person’s technique if they know in advance what they intend to do. That this kind of training totally defeats the purpose of practice and that one cannot progress by training this way. Sensei then proceded to ban my partner from practice at the dojo. The man was totally humiliated and immediately left the dojo with his head hanging down. Sensei eventually let the man back after about a month. From that point on, he trained in a respectful way and became an exemplary student. I trained with him several times after that and it was an enjoyable experience. He later established his own dojo and is still active.’

With thanks to Kokoro Kai Iwama Ryu – taken from their facebook page.

This site uses Akismet to reduce spam. Learn how your comment data is processed.