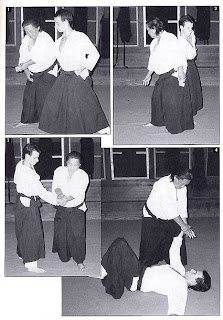 One of the things that discourages beginners from continuing in Aikido is their inability to learn the techniques of Aikido.
When a person first starts in Aikido, the techniques seem endless and confusing. They seem complicated with many parts and things to remember. Often, the beginner is frustrated when he watches a technique shown by the instructor; but when he tries to do it, he can’t begin to remember what to do or even how to start.
A good rule of thumb for beginners to know in order to be able to remember the techniques shown to him in class is the following:First, look at what the attack is. When practicing aikido techniques, the older student usually will be nage first so the beginner should observe the role of uke (the attacker) since that is the part he will play first. He should first notice what kind of attack is being shown.
Secondly, the beginner should notice how the uke takes ukemi for the instructor so that he too can follow with the same kind of movements in order to protect him or herself.Then follows the role of nage. The beginner should first look at the lower part of nage’s body. Notice what the kamai (or stance) that nage begins in. Observe the movement of the feet and hips. When the technique is shown for the second time, the Aikido practitioner should study the movement of the arms and hands.
He should see how nage uses the extension of his arms, whether the palms of the hands are up or down and he should also observe the general posture of the instructor as he performs the technique.Last, the beginner in Aikido should watch the entire body and movement of the instructor as he does the technique. He should especially notice how the instructor finishes the technique. He should remember if it is a standing or seated pin. He should observe the final position of the feet and arms and he should remember the movement of the instructor after the technique is finished.
The four points are simple to remember:
1. Watch what uke does.
2. Watch the stance and foot movements of the instructor.
3. Watch the upper body, arms and hands.
4. Watch the whole movement of the technique and how the instructor finishes.
The beginner in Aikido should focus as much as he can in reproducing exactly what he has seen. This is also an important part of Aikido training. Sometimes, as we are training, our bodies begin to tire and we forget to concentrate. Maintaining our focus, especially when Aikido techniques are being demonstrated, is a vital part of our training. This is the mental part of Aikido Training.
If a beginner can’t remember the techniques after class is over, he or she should not be concerned or discouraged because with regard to learning techniques, the founder of Aikido, Morihei Ueshiba said, “Learn and Forget, learn and forget.” (something I excel at! DF)
By this, he meant that the ability to perform Aikido techniques was not based on the power of memory, but by practicing continually. It is through constant training that we will naturally remember and learn Aikido techniques and through steady and regular training, we will someday naturally and spontaneously reproduce the movements of Aikido without having to “memorize” the techniques with our minds.
I hope this helps our beginners to relax and enjoy their training.
Brian Kagen
Thanks for taking the time to read this blog, and I hope it makes you want to find out more about Aikido
www.aikido4beginners.co.uk