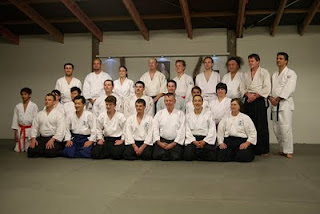 At last. it is done. After nearly 9 months of hard graft the dojo is finally finished, and the remarkable thing is, it actually looks like our original drawings!
As I said during the opening ceremony, all building projects go over time and over budget, and this did both magnificently. We ran out of money by about month 6, when the council made their 4th ridiculous addition to “what we had to do to meet compliance”.
Truthfully, there were times when we felt like giving up on the whole project.
Interestingly enough, during some of the most stressful times when we were in heated face-to-face disputes with office-bound Bureaucrats, who clearly didn’t see what we were trying to achieve (and more importantly didn’t want to) and flatly refused to budge a millimetre from the letter of the law (even though common sense dictated that what they were asking was not only unnecessary, it was ridiculous) it was by staying as relaxed as possible and centred, that got us results.
At one point we had a whole day of correspondence with one department insisting we planted a row of trees to ‘block the view of the new building from the road”. The dojo is down a slope, behind a block of 30m high bamboo, and virtually invisible apart from the front metre or so of the roof. None of these guys had actually inspected the site, and were just reading from the planning rule-book. I could understand it if we were in a city area where our building would overlook or have an impact on neighbouring properties, but we are on a 5 acres plot and you’d have to climb on a fence post to even wave to the nearest neighbour.
Change the particular rule being referred to, and repeat on a monthly basis, and you get an idea of what we were up against.
So eventually – it was done. I have personally thanked all the people that helped many times already, but they deserve public credit. Firstly to my wonderful wife and daughter who suffered nearly a year of being skint as literally every penny we had poured into the build – I promise we’ll have a decent holiday next year :0)
Secondly, to the fantastic members of our little organisation – who gave up days and days of free time to pull down walls, dig holes, wheel barrows, paint, sweep, carry and everything else that needed doing – truly without you guys this simple wouldn’t have happened.
Now our dream has become reality – we have a beautiful full-time dojo, on our own land, with 110 sq metres of top class matting, changing rooms and even a washroom. As we speak we are moving a sofa and comfy chairs into the “watching” area and an apple mac so that we can start streaming live classes via the web (watch this space)
. There is even a beer fridge (hey, this IS New Zealand…) 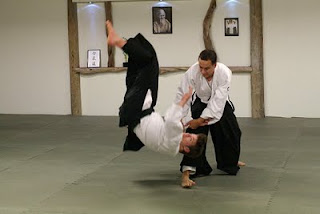 The kamiza (kamidana) was beautifully crafted by a local chippy using driftwood from the nearby beach and finishes off the place wonderfully. We were very lucky to have sensei Frank Burlingham, 5th dan, visiting from the UK and he kindly officiated at the opening and honoured us by sharing some of his Aikido with us. Even with 26 on the mat there was plenty of space, and everyone enjoyed the night, including the celebratory saki afterwards…
We have space now for a couple if live-in students, and plan to start running a uke–deshi scheme in the next few months.
If you are ever in Auckland, feel free to pay us a visit!
Thanks for taking the time to read this blog, and I hope it makes you want to find out more about Aikido
www.aikido4beginners.co.uk