STAR WARS, GEORGE LUCAS AND THE POWER OF KI 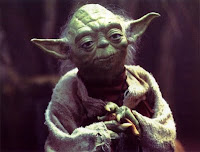 As you know, I’m always on the lookout for interesting tid-bits and articles from around the world. This is a great little article I stumbled upon, that not only offers some insight into the fascinating subject of “Ki”, but also suggest that Star Wars was directly influenced by Aikido!!

As a longtime practitioner of the Japanese martial art, aikido, George Leonard is quite familiar with the life-force energy that seemingly flows through all things. Unfortunately, in the West the closest term we have to approximate the nature of this life -force is the word “energy.” Leonard feels that this is a bad translation at best. Called ki in Japan, this so-called “energy” has been known by many names in many cultures and historical periods: chi in China, prana in India, pneuma in ancient Greece, mana in Hawaii, elan vital in Vitalist philosophy, the Force in Star Wars.
Leonard joked that when he saw the movie Star Wars, there was a line uttered by Obi One Kenobi that seemed to be copied directly out of his own book, The Ultimate Athlete, “The Force is that particular force which permeates all living things and goes to the ends of the universe.” When he met George Lucas, he learned that Lucas had indeed been influenced by his writings.For Leonard, aikido is a way of harmonizing with the spirit of the universe.
Importantly, he emphasized that at some point the scientific paradigm must let go of “proof” and “belief” and must instead engage in direct experience with the ki of aikido. As Leonard said himself, “I don’t believe in ki, I just do it.” Because the West is so fascinated by brute strength and force, it has overlooked the subtle nature of ki.
Leonard recounted some of his humorous experiences with the nature of ki in which he confronted men much larger and stronger than he. In an demonstration in front of the conference participants, Leonard revealed the power of ki by repulsing Steve Dinan. When Steve confronted Leonard’s energy, he felt the direct impulse to yield, because the power of Leonard’s ki was so strong. After the demonstration, Leonard emphasized that ki can be enhanced by imagery and visualization and that it is a qualitatively different experience than muscle power.
So how do we explain the phenomenon of ki? Leonard offered a plethora of ideas that are being explored.
Some researchers are investigating the electro-magnetic field of the human body, while others are looking at the electro-static field. Leonard mentioned the research of Jan Wallenczak at Stanford, who has demonstrated that there are effects taking place below the thermal barrier (KT), when, according to classical physics, this should not be happening. Other more radical theories and investigations are also cropping up, such as string theory and M theory in physics. Leonard also mentioned the zero-point energy theory of Harold Putoff.
One growing orientation is that we are essentially swimming in a pool of energy that is all around us. Leonard feels that we need to investigate how human intentionality can serve as a bridge to access this ubiquitous energy. Like Marilyn Schlitz, Leonard believes that human intentionality is a vague but very significant force that we are only beginning to understand. Leonard is particularly curious about how intentionality relates to the nature of the subtle energies, such as ki.After his brief presentation, Leonard had a couple important points to emphasize in conclusion.
First, he offered that the nature of ki might well be incorporated into any comprehensive evolutionary theory. He mentioned that although gravity is the weakest of the four recognized forces of physics, its reach is endless, and it overcomes everything in the end. Perhaps ki as well is like gravity in this respect. Leonard also mentioned that after years of experience in teaching people about the nature of ki, he has realized that all people need is permission to begin to access this seemingly amazing ability. Lastly, Leonard offered an important orientation for the entire conference.
Because the Western, scientific worldview is so bent on discovering certain and demonstrable “truth,” we often miss out on the mystery and wonder of it all. Leonard rhapsodized that we live in an imponderable universe of unfathomable beauty, truth, and mystery. The only thing that will ever hamper our quest for truth is the very nature of our minds.
We must always remain curious and open to new vistas and new horizons. Leonard closed with a poem encapsulating this view:
Do not think this is all there is
More and more wonderful teachings exist
The sword is unfathomable
Thanks for taking the time to read this blog, and I hope it makes you want to find out more about Aikido
www.aikido4beginners.co.uk