The History of Morihei Ueshiba, Founder of Aikido 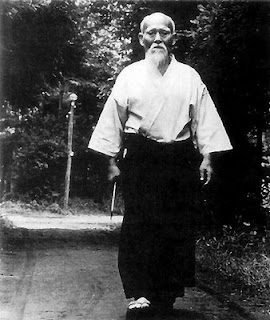 Taken from the book “Aikido – A beginner’s Guide”

The History of Morihei Ueshiba, Founder of Aikido

1900? Graduates and goes to work for theTanabe tax office as a land value assessor.

1902 Resigns from the tax office and in September moves to Tokyo to open a stationery store. Briefly studies Tenjin Shin’yo-ryu Jujutsu and Kenjutsu. Marries Hatsu Itokawa (b. 1881) a distant relative, in Tanabe.

1904 Sent to front as corporal in Russo-Japanese War. Returns as sergeant. During this time, attends Masakatsu Nakai’s dojo in Sakai (Goto School of Yagyu-ryu jujutsu).

1912 Becomes leader of the Kishu group, consisting of fifty-four households (80+ people). In March they leave Tanabe for Hokkaido. They arrive in May and settle at Shirataki, near village of Yobetsu, to start a farming community.

1919 Leaves Hokkaido in December due to father’s illness. Transfers land and property over to Sokaku Takeda. Meets Onisaburo Deguchi of Omoto religion in Ayabe, Kyoto Prefecture. Stays in Ayabe until December 28th.

1921 On February 11, authorities clamp down on sect and arrest several people including Onisaburo. Third son born (Kisshomaru, but birth name Koetsu) in June.

1924 Secretly leaves Ayabe on February 13th for Mongolia with Onisaburo Deguchi with concept of establishing a utopian community. The party, led by Onisaburo Deguchi, including Ueshiba, is captured and held prisoner by the Chinese military for plotting the overthrow of the government. Released after a short internment through intervention of Japanese consulate and returns to Japan. Ueshiba teaches at the Ueshiba Academy and works on the Tennodaira farm. Becomes fascinated by sojutsu (spear technique). Ueshiba reflects on his Mongolian experiences particularly facing death under gunfire. He found that he ‘could see flashes of light indicating the path of oncoming bullets’. From here on he frequently encountered situations where he felt manifestations of a spiritual force.

1925 In spring, Ueshiba is challenged by a young naval officer and master of Kendo. He defeats him without actually fighting because he could sense the direction in which the blow would fall before the officers wooden sword could strike. Immediately after this encounter, Ueshiba goes to wash at a well, and experiences “a complete serenity of body and spirit”. At the same time “the unity of the universe and the self ” became clear to him. It was at this time that Ueshiba changed the name of his art to Aiki-budo.

1926 In spring, Ueshiba is invited to return to Tokyo by Admiral Takeshita, where teaches at the Imperial Court and at the Imperial Household Ministry. In the summer, Ueshiba returns to Ayabe ill with an intestinal disorder.

1927 Moves to Tokyo with entire family. Establishes temporary dojo in billiard room of the Shimazu mansion in Shiba, Shirogane in Sarumachi.

1929 Moves with family to Shiba (near sengaku temple), Kuruma-cho, sets up temporary dojo.

1930 Moves to Shimo-Ochiai in Mejirodai. In October, Jigoro Kano of Judo observes demonstration by Ueshiba in Mejiro dojo and dispatches several students from Kodokan, including Minoru Mochizuki and Jiro Takeda, to study. Ueshiba is visited by Major-General Makoto Miura, who is sceptical and only comes to defeat Ueshiba. However Miura is impressed and changes his mind. At Miura’s request, Ueshiba becomes an instructor at the Toyama Military Academy.

1931 Dedication of eighty mat aiki-budo dojo inaugurated as the Kobukan dojo in Ushigome, Wakamatsu-cho. This becomes known as “hell dojo” because of the intense training.

1932 Budo Sen’yokai (Society for the Promotion of Martial Arts) is established.

1935 Film documentary of Aikido Budo made in Osaka. This is still the only known pre-war film of Morihei Ueshiba

1939 Invited to instruct in Manchuria. Fights ex sumo wrestler Tenryu and pins him with one finger.

1941 Aiki-budo is assimilated into the Butokukai (a government body uniting all martial arts under one organisation). Gives demonstration at Sainenkan dojo on imperial grounds for members of the imperial family. Teaches at military police academy. Invited to Manchuria to instruct during University Martial Arts week. Becomes martial arts advisor for Shimbuden and Kenkoku universities in Manchuria. The name AIKIDO first comes into use.

1954 Hombu Dojo moves back to Tokyo from Iwama and takes the title “Aikikai Foundation: The Hombu Dojo of Aikido”.

1955 Travels to Osaka for several weeks to instruct in dojo of Bansen Tanaka.

1964 Receives Order of the Rising Sun, 4th Class, as Founder of Aikido.