The Teachings of O Sensei 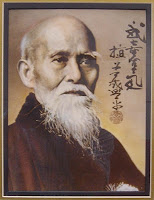 With thanks to the Los Angeles Aiki Kai website.

“Aikido is a manifestation of a way to reorder the world of humanity as though everyone were of one family. Its purpose is to build a paradise right here on earth.”

“Aikido is nothing but an expression of the spirit of Love for all living things.”

“It is important not to be concerned with thoughts of victory and defeat. Rather, you should let the ki of your thoughts and feelings blend with the Universal.”

“Aikido is not an art to fight with enemies and defeat them. It is a way to lead all human beings to live in harmony with each other as though everyone were one family. The secret of aikido is to make yourself become one with the universe and to go along with its natural movements. One who has attained this secret holds the universe in him/herself and can say, ‘I am the universe.’”

“If anyone tries to fight me, it means that s/he is going to break harmony with the universe, because I am the universe. At the instant when s/he conceives the desire to fight with me, s/he is defeated.”

“Nonresistance is one of the principles of aikido. Because there is no resistance, you have won before even starting. People whose minds are evil or who enjoy fighting are defeated without a fight.”

“The secret of aikido is to cultivate a spirit of loving protection for all things.”

“I do not think badly of others when they treat me unkindly. Rather, I feel gratitude towards them for giving me the opportunity to train myself to handle adversity.”

“You should realize what the universe is and what you are yourself. To know yourself is to know the universe.”

“As ai (harmony) is common with ai (love), I decided to name my unique budo Aikido, although the word ‘aiki’ is an old one. The word which was used by the warriors in the past is fundamentally different from that of mine.”

“Aiki is not a technique to fight with or defeat the enemy. It is the way to reconcile to world and make human beings one family.”

“Those who have a warped mind, a mind of discord, have been defeated from the beginning.”

“Then, how can you straighten your warped mind, purify your heart, and be harmonized with the activities of all things in Nature? You should first make the kami’s heart yours. It is a Great love, Omnipresent in all quarters and in all times of the universe.”

“There is no discord in love. There is no enemy of love. A mind of discord, thinking of the existence of an enemy is no more consistent with the will of the kami.”

“Those who do not agree with this cannot be in harmony with the universe. Their budo is that of destruction. It is not constructive budo.”

“Winning means winning over the mind of discord in yourself. It is to accomplish your bestowed mission.”

“This is not mere theory. You practice it. Then you will accept the great power of oneness with Nature.”

“Don’t look at the opponent’s eyes, or your mind will be drawn into his eyes. Don’t look at his sword, or you will be slain with his sword. Don’t look at him, or your spirit will be distracted. True budo is the cultivation of attraction with which to draw the whole opponent to you. All I have to do is keep standing this way.”

“Even standing with my back toward the opponent is enough. When he attacks, hitting, he will injure himself with his own intention to hit. I am one with the universe and I am nothing else. When I stand, he will be drawn to me. There is no time and space before Ueshiba of Aikido — only the universe as it is.”

“There is no enemy for Ueshiba of Aikido. You are mistaken if you think that budo means to have opponents and enemies and to be strong and fell them. There are neither opponents nor enemies for true budo. True budo is to be one with the universe; that is to be united with the Center of the universe.”

“A mind to serve for the peace of all human beings in the world is needed in Aikido, and not the mind of one who wishes to be strong or who practices only to fell an opponent.”

“True budo is a work of love. It is a work of giving life to all beings, and not killing or struggling with each other. Love is the guardian deity of everything. Nothing can exist without it. Aikido is the realization of love.”

“I do not make a companion of men. Whom, then, do I make a companion of? The kami. This world is not going well because people make companions of each other, saying and doing foolish things. Good and evil beings are all one united family in the world. Aikido leaves out any attachment. Aikido does not call relative affairs good or evil. Aikido keeps all beings in constant growth and development and serves for the completion of the universe.”

“In Aikido we control the opponent’s mind before we face him. That is how we draw him into ourselves. We go forward in life with this attraction of our spirit, and attempt to command a whole view of the world. We ceaselessly pray that fights do not occur. For this reason we strictly prohibit matches in Aikido. Aikido’s spirit is that of loving attack and that of peaceful reconciliation. In this aim we bing and unite the opponents with the will power of love. By love we are able to purify others.”

“Understand Aikido first as budo and then as the way of service to construct the World Family. Aikido is not for a single country or anyone in particular. Its only purpose is to perform the work of the kami.”

“True budo is the loving protection of all beings with a spirit of reconciliation. Reconciliation means to allow the completion of everyone’s mission.”

“The ‘Way’ means to be one with the will of the kami and practice it. If we are even slightly apart from it, it is no longer the Way.”

“We can say that Aikido is a way to sweep away devils with the sincerity of our breath instead of a sword. That is to say, to turn the devil-minded world into the World of Spirit. This is the mission of Aikido.”

“The devil-mind will go down in defeat and the Spirit rise up in victory. Then Aikido will bear fruit in this world.”

“Without budo a nation goes to ruin, because budo is the life of loving protection and is the source of the activities of science.”

“Those who seek to study Aikido should open their minds, listen to the sincerity of the kami through Aikido, and practice it. You should understand the great ablution of Aiki, practice it and improve without hinderance. Willingly begin the cultivation of your spirit.”

“I want considerate people to listen to the voice of Aikido. It is not for correcting others; it is for correcting your own mind. This is Aikido. This is the mission of Aikido and should be your mission.”