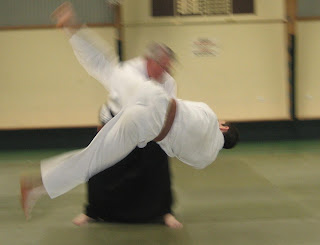 There is an old Japanese samurai saying, “When the battle is over, tighten your chin strap.” This refers to constant awareness, preparedness for danger and readiness for action. The Japanese saying itself focuses on the end of a combat engagement when it is natural to relax awareness, thinking the danger is over, when in reality it often is not. “This concept carries over into the dojo which is not just a training hall but a place where a certain awareness of the possibility of serious combat must constantly be maintained,” said John Donohue in his article Kendo: The Way of the Sword. But, for the serious martial artist this heightened state of awareness becomes a natural part of the psyche, something that is automatically turned on while awake as well as during sleep.

In karate practice when kata are completed students are expected to stand quietly for a few seconds. This is zanshin practice — the maintenance of readiness for action even though the physical aspect of a particular kata is finished. In iaido, partners practice kata with wooden swords. From the moment the opponents face each other until they finish working together, the participants practice zanshin. The sense of heightened awareness allows partners to practice potentially dangerous moves in safety, by controlling technique. Zanshin also supports good technique in the kata. The idea behind partner practice is that technique becomes second nature, while zanshin continues to be developed. In aikido, daito ryu aikijujutsu and many other arts, when a technique is completed (the attacker often on the ground having been subdued) the defender is taught carefully to maintain his or her awareness, position of advantage and readiness to resume action if need be–zanshin.

“On one level, zanshin refers to neutral, non-threatening stances or kneeling in such a way as to be always ready for action. Zanshin is also the flip side of single-minded devotion to technique. You must learn not to focus exclusively on your actions but rather to be attentive and receptive to all activities surrounding you,” says Donohue. It may seem contradictory, he continues, “but both the ideas of focusing entirely on technique and of maintaining zanshin have to do with the transcending of subjectobject distinctions through martial training. Unity with the Void, to use Musashi’s (the famious Japanese swordsman) idiom, results in the execution of technique without any selfconscious awareness of doing so. By the same token, proper zanshin is indicative of the fact that the swordsman experiences no discontinuity between his surroundings and himself.”

Various martial arts have different ways of training to develop heightened zanshin. Opponents are sometimes allowed to attack from the rear in order to develop an almost intuitive sense of impending attack. Another exercise places a defender in the middle of a circle of opponents who attack one by one and sometimes in groups — the defender using heightened awareness and/or intuition to anticipate attacks, often combined with movement for protection. In one style of karate (Seido) students testing for black belt train blind folded and then are led through the streets of New York City to heighten their senses and awareness. Often students report that the experience made their senses pop open, every sound, its source and direction, the feel of the floor or street, the sense of others being close by — all becoming heightened and experienced as never before.

There is an old Japanese story about a young man who sought teaching from a great swordsman. After being accepted, the student endured several years of personal service — cooking, washing and cleaning for the teacher. Then his lessons began, but not practice with a sword. His teacher began to surprise
him with incessant attacks with a practice sword — when the student was cooking, sleeping, anytime. Over time the student’s pains and bruises lessened as he gradually learned to avoid and dodge the attacks. Finally the student asked the teacher when actual sword training was to begin. The teacher then replied that he had been taught all that he needed to learn. This was zanshin, such total awareness that the student could sense and then avoid the attacks.

Zanshin is what many soldiers, law enforcement officers and advanced martial artists endeavor to develop. In some forms of meditation and Zen, zanshin is also a goal for students — total attention to the moment: the focusing of the mind (without thought or emotion) on everything around them.

Roy Suenaka, the author of Complete Aikido, tells a story about aikido’s founder that is the epitome of this concept. They were seated on the floor face to face having tea and talking when Morihei Ueshiba, without turning his head, casually reached behind himself and then held something out for Suenaka to see. “Ah, a young cockroach,” he said, before gently putting it to the side. Only later did the significance hit Suenaka. How was Ueshiba so aware that even when focused on their conversation could he not only sense the presence of something so small but be able to know exactly were it was so that he was able to pick it up without looking?