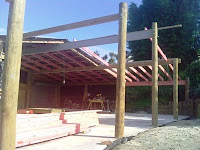 After a lot of discussion, holding up the plans to the light (then turning them around so that they were the right way up) and drinking of tea out of large enamel mugs, we have eventually arrived at what is now referred to on site as “Phase II”.

basically, the tricky bit was to dig the footing for the concrete floor to be poured, without wrecking the existing barn or destroying the chook shed, which just happens to be connected to the back of the barn. Some amazingly dextrous work by Gareth and Darcy on the digger managed to provide us with a decent trench, whcihwe then boarded and re-inforced with old doors and plywood, as we’ve had such a dry summer the ground is either like dust or rock, either way as soon as you dig a trench it collpses.

The concrete trucks started arriving – 6 in all, and Gareth’s guesstimate was almost perfect – 25 cubit metres of concrete and about 4 hours of sweat later, we had a floor.

At this point it would have been great to have said “here’s one we made earlier” and carried on, but of course we then had to down tools and wait until it hardened off.

Then came the tricky bit (there seem to be a lot of these). 3 12 meter steel I beams, each weighing about half a tonne ariived on a truck. The nice man unloaded them in the most inconvenient spot he could find and disappeared like Allidin’s genie. A combination of people, levers, bits of wood and swearing manaed to eventually roll these huge dead weights into position. Watching from the comfort of the kitchen window, i was reminded of one of those 1950’s epic Egyptian movies where slaves moved huge lumps of rock on rollers across the dessert….

A day, and two mechanical hoists later, the beams were up. Everyone seemed very pleased with themselves and celebrated by drinking lots of strong tea out of large enamel mugs and swearing.

Now – the roof. The plan was to use the best value timber we could find for this, as long as it had a decent finish, as these beams will be exposed in the final design. The samples we had were natural wood with a slight green tinge to indicate they had been pressure treated. When the wood arrived, we found out that the previous week had sen the advent of a new regulation, whereby all timber of this grade is now stained pink. Not a pale blush pink, or even a warm flesh colour. We are talking real “AAAArgh!” pink. I’m assured that this will fadequite quickly, but at the moment I’m expecting our membership to swell upon completion, especially with girls in the 8-11 age groups.

So, we are slightly behind schedule, slightly over budget, we still don’t have the roof on and there are gail force winds and rain forecast for next week. (to be continued…)