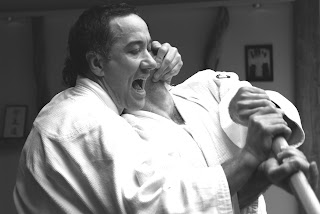 A great piece on  the concept of “irimi” by Ellis Amdur.  Well worth a read.

I recently read a post which includes an oft-used phrase—“get off the line and enter.” Not only does this phrase not do full justice to the concept of irimi (I confess I’ve used it myself), it leads to a mistaken understanding of aikido technique. This mistake is not only intellectual, but expressed physically, probably lies at the root of the technical deficiencies that are, allegedly, so rife in aikido.
“Getting off the line,”at least as most people I’ve observed execute it, is reactive. We side-step, get out of the way of the attack, etc. Irimi is then imagined to be a counter-attack on an angle—martial arts as the application of geometry, so to speak.
In Japanese, reactive counters are often called “go no sen,” which is a counter to the other’s initiative, but even this is not accurate. In fact, reactive counters are commemorated with tombstones.
In Go no sen, one takes the initiative away from the other and rules him. Imagine a conversation in which someone raises his voice, and in the middle of his tirade, I hold my hand up and out and say, “Not one more word. Be still.” And they are silent. An argument is reactive, as in, “I don’t like your tone of voice! And you are wrong,” to which they reply again, and I respond to that. An argument is often referred to as verbal sparring or verbal fencing. Go no sen is dominant—one cut, one life.
One place we see this is in kenjutsu, and an exemplar of it is in Itto-ryu (remember the deep ties that Itto-ryu has with Daito-ryu). As the enemy cuts, so, too, do I cut. Not “along” the same path. ON THE SAME PATH. Two objects cannot occupy the same space, and I, with greater power/speed/timing/postural stability, etc, take that space. The enemy is, ostensibly, deflected, but they are NOT knocked away. They are simply not allowed to occupy that space. And often there is no tai-sabaki (body displacement, getting off line). There might be. If there is, it is simultaneous—not one following the other. But even beyond that, tai-sabaki is not part of the fundamental definition of irimi, simply an elaboration of it.
Irimi in aikido occupies space the same way. This, by the way, is the true essence of atemi—not pugilism—but using the body (particularly the limbs) to take space the opponent is trying to occupy. Sometimes one steps off line, but sometimes one steps across line or even in line. Like a swimmer diving right in the belly of a breaking wave. Like Shioda Gozo in one of his favorite techniques where, in respond to a two-hand grasp, he steps in with suddenly rigid downward arms and the opponent, bounces upwards and away. Like Nishio Shoji in that subtle little twist he did with his wrist at the moment he was grasped, creating a small but inexorable wave of recoil (kuzushi) into his partner. Like Kuwamori Yasunori used to do with his hips, taking the place right where your advancing thigh was about to occupy in his wonderful koshinage. Like Chuck Clark in the way he puts that meaty fist right where your head is about to be. All irimi with no moving off line whatsoever.
Aikido technique—that which we practice so much, and seems so open to criticism by folks who recommend adding a touch of boxing and a tad of judo—is the EFFECT, not the essence of aikido. Properly, technique drops in one’s hands after the aikido’s already been done.
And tenkan? I’ve written on this elsewhere, but in brief. Tenkan imagined as spinning away/finesse/leading into a circular path is not part of aikido. Merely part of fantasy played out on the mat. Tenkan is always preceded by irimi. The opponent is so skilled or powerful that even as irimi takes his space, he is wrapping around it/taking the space back, and so one wraps them in a circular motion/technique. Because irimi did take their center—if only momentarily—he’s got to “go around.” The circular motion starts with him. Tenkan is like taking hold of a planet and adding speed and some ellipse or spiral or tangent to its circular revolution. Aikido ura techniques (tenkan) take the person on a tangent—inward or outward—to their circular path. Tenkan should be described as spiral, not circular—it is the permutations of an initial circle once we have taken it over. But if irimi had not already won half or more of the battle, there would be no tenkan to accomplish. You would simply be defeated.
Thanks for taking the time to read this blog, and I hope it makes you want to find out more about Aikido
www.aikido4beginners.co.uk