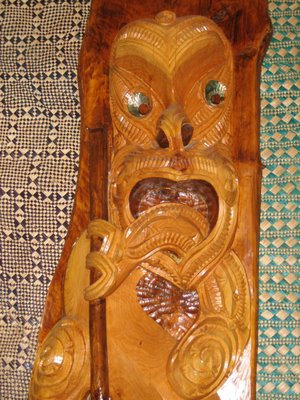 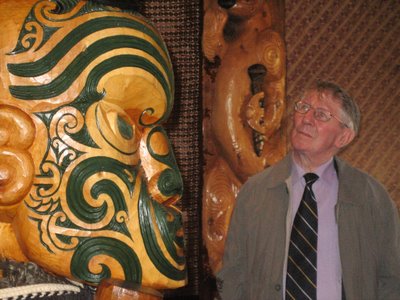 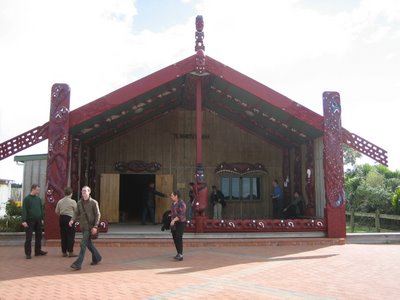 
One of the “off-the-mat” highlights of Sensei Fosters visit at Easter was the trip to the beautiful Navy Marae at Devonport, Auckland. We are very lucky that one of the nidans in the club (Kyu Shin Do) Johnny Pungatara is a Navy Diver, and he managed to set up the visit which, for me personally, was one of the highlights of the year.

There were about a dozen of us in total representing the club, including our visitors from the UK, and we were briefed on arrival as to the protocol for the morning. It was a clear sunny day, and we waited outside under the entrance way, or “Tangaroa” with the females of the group towards the centre (this comes from the tradition of “protecting your most valuable asset” – ie: no women, no kids! Very sensible if you think about it, and the girls loved being referred to as “valuable”! When I think about it, my dad always used to make sure my mum walk on the inside, away from the traffic, when we went shopping down the high street… same thing I guess!).

The group then slowly walked forwards, Sensei Foster to the fore, and paused for a moment in the open area in front of the Marae, known as the “Marae Atea” before walking up to the front of the wonderfully carved building (whilst a female representative of the marae welcomed us with a lovely but melancholy call (“karanga”). We were then welcomed (in English) by the navy representative of the Marae, and he took time to talk us through the meanings of the various carvings on the front of the building, many of which represented military themes throughout the history of New Zealand, ending up significantly with a carving representing the doves of peace. Taking off our shoes, we entered the building.

The Marae is about 40 metres long by about 20 wide, and basically four walls, a roof and some supporting pillars. There is no furniture apart from a few benches for visitors to sit on whilst being welcomed. There are, however, carvings on every wall, and the ceilings, all of which are surrounded by paintings. The quality of the carving was truly superb, each with it’s own symbolic attachment, and the paintings, ranging from simple iconic swirls and motifs to scarily realistic facial portraits, hidden in amongst larger murals, were both powerful and though-provoking.

We all sat down, opposite the Navy Marae representatives (two male and two female) and were formally welcomed (the “Mihimihi”) in Maori, and then in English. As is the tradition, one of our group then spoke in response (he is from Rorotanga, one of the islands near to NZ, so apparently the language used was slightly different, but close enough!).

Then, the songs. The marae team sang a beautiful traditional song which stuck in my head for the rest of the day, and then it was our turn. Traditionally, either we all sing as a group (the navy boys said they were absolutely fed up with hearing british visitors singing “Swing low sweet chariot”…) or the group’s best singer represents them. Luckily for us, we had the option of the latter.

Melodie, one of the clubs shodans, also is a trained singer, in the classical style, and her father kindly accompanied her (on a hastily erected electric piano which he brought along – thanks Dave!) to a very moving version of “oh Danny Boy”, which had several members of both parties dabbing at their eyes.

After the formal greetings were over, we were then given a guided tour around the inside of the Marae. With an explanation or story attributed to virtually every carving or mural, this was absolutely fascinating.

I’m not familiar enough with Maori culture to really describe what a marae actually is. It seems to be multi-functional; a meeting hall, a sacred place, a sanctuary, a community centre, a school, a place of worship (and remembrance of ones ancestors), a living work of art. Oh, and they also do a great cup of tea.

On behalf of Kyu Shin Do Aikido, and all the attending members representing the Institute of Aikido both here and in the UK, I’d like to thank the guys at the navy marae for making us so welcome, and for making us feel truly part of their family.