BUILDING A DOJO IN AUCKLAND… Part 3 Getting K.O.-ed 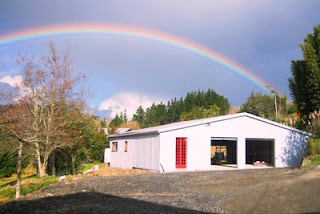 At last, we are gradually getting to the stage where we can see this as a finished building. On-site, we grandly refer to this as “Phase III”.

I think this is because basically we haven’t got a clue what we’re doing and it makes us feel more important.
I refer to our incompetence in the broadest sense, with no disrespect meant to Gareth Hodgkiss, my incredibly expereinced Project Manager/Builder/Carpenter/Engineer/Labourer/Drainage Consultant/Digger Driver who is also my neighbour and friend, who has been amazing and worked like a dog throughout the last 3 months.
The point I‘m making is that ALL construction projects, no matter how carefully scoped, budgeted, planned and drawn-up all end up running over time and costing more money than you actually have and this genuinely doesn’t reflect on the poor people running the project.
Isambard Kingdon Brunel was regarded as a genius and a great engineer and leader in his field, but many of his most famous achievements took waaaay longer than planned at almost double the cost.
I think this needs a name; “Sod’s Law” just doesn’t do it justice. For the sake of argument, lets call it “Knock-on-effect Disorder or K.O.-ED. So why do nearly all building and construction projects end up getting K.O.-ed?
Here’s what happens. You start a project and you get to the point whereby the Council need to come out and inspect the work – for example the concrete footing. They say “very nice, but how are you going to handle the water run-off? You’ll need a drain”. So all of a sudden you find yourself having to hire a digger – again. Then you dig trenches, get drainage pipes and porous stone delivered, pour more concrete and pay for yet another Council inspection. This of course puts you behind time and budget.
Now there was no way that anyone could have planned for this, as there is no way of guessing what each individual inspector will want. They all have their own preferences and bias, within the umbrella of The Planning Rulebook. 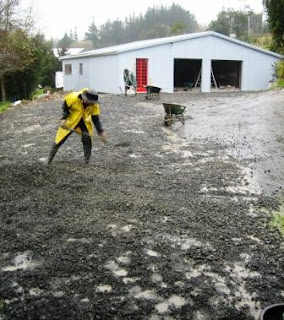 So you get that done, then you realize that the truck that delivered the digger was so heavy it has churned up the drive and has broken the concrete. So now you have to re-lay concrete and get 7 metric tonnes of top dressing stone delivered, spread it by hand in the rain (I kid you not – see picture) before you even have a workable, accessible site to get back to.
More cost, more time.
Then came the rain. For those of you that don’t know Auckland, it is famous for being able to produce glorious sunshine, wind, rain anything else the weather gods can conjure up, all in the space of five minutes. But sometimes it just rains. And rains….


The day we spread the stones over the parking

area was one of those days. We had so much water flowing down the drive it looked like a stream, and even when we dug a few “diverting” trenches to push the water elsewhere, we still ended up with so much surface water that we had no option but to dig another set of drains, this time along the front of the dojo so that, should we get rain like this again (likely!) students leaving the dojo wouldn’t have to swim to their cars. 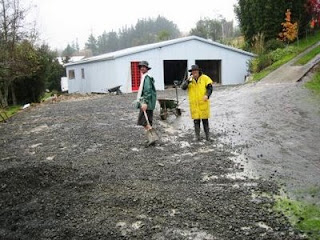 All good fun. To cut a long story short, Sunday evening saw two very tired men, socked to the skins laughing at how much water was in their gumboots whilst standing waistdeep in a water-filled trench, drinking heineken.

So now we wait for a break in the rain and the ‘final’ inspection from the council…..