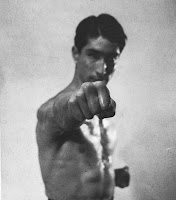 I was watching a show on National Geographic last night by the name of Fight Science. It’s basically a show which analyses various martial arts to find how they work, their efficiency and also their pros and cons. In the one I saw, they brought in a Kung Fu master to demonstrate the use of chi. It was truely phenominal, as he was able to stick a spear to his throat and lean on it without being punctared. The part that I was more interested in, though, was what he did next. The master proceeded to get hit with a baseball bat in his stomach and not be severely injured.

It was also impressive, but one thing I noticed was that he moved into the baseball bat. The scientist on-board mentioned that this would make it worse for the Kung Fu master, as more force would be impacting, and I would have to disagree with that. I find that if you move into an attack, it doesn’t have as much power as it could have had if it was followed through.

Now, I’m not a scientist but I do think about this from a logical and experience point of view.

The scientist states that when doing any action, such a punch, swing, etc, the energy is generated all the way from your foot and is brought up through your body. I have to disagree with this as well. Talking from a chi point of view, your life force or chi is generally situated right below your belly button. Now, when throwing a punch, it is my impression that the power is generated from there, by moving your hips (or the center of your body), moves down to your feet to connect to the earth, then comes ‘back’ up through your body and exits through your fist. For those of you that are thinking “what the hell”, I would like you to get up, just for a moment, and throw a powerful punch with some weight behind it.

Think for a second, did the power generate from you lifting you back heal up or did it generate from your center, by moving your hips. A lot of boxers will find that their punches have a lag effect to the movement of their torso, this is because the hips moved first and the arm was simply carrying the energy further through the body and the fist finally delivering that energy. That’s actually quite a lot of power, if you can do it right, getting your weight behind your punch.

In Aikido, everything is generated from the hips, to get the center moving. Our limbs moving around that are either an effect (bi-product) or an additive to fine tune the technique to actually make something of the movement. It’s very rare that your arms and legs play a part of power in Aikido, because that’s what your body does, and if your center is pointing to where you’re going, and your limbs are connected to your center you’ve already got the power of your entire body, which is why Aikido doesn’t need strength to make it work. If you are using your limbs, alone, then strength plays a large part.

Anyway, back to Chi. With the idea in mind that power is generated at a particular part of the body, regardless of where it is, and carried through until it reaches the exit, now think about what happens when you stop that energy before it reaches it’s destination. A good example of this would be against a high, round house kick. Many martial artists will tell you to move into a kick, because there is no power. Why is there no power, though? It’s because the energy generated is at a part of the body which was before it’s destination — such as the thigh or knee. If the energy is not at a certain point at a certain time in the body, then your body-weight is not behind it fully, as well as the muscles which are used on impact are not tensed or in use.

Many martial artists believe in the pull-back effect being the most effective method of power distribution — basically once you are at your point of contact, you pull back your limb to give a whiplash effect. This is excellent for delivering a blow with a lot of power and energy but not giving yourself away. If you can time your kick or punch in such a manner that you know where the point of contact will be, you can pull back allowing yourself to avoid over-extending and possibly losing your point of balance. Another interesting point as well, is that once you pull back from an attack your muscles in that part of your body react by tensing to create that movement, and as such release an explosion of energy onto the receiver.

From an Aikido point of view, we use menuchi-waza (strike) to train with, and one of the commonly known is the Shomenuchi-waza, which is basically a strike straight from the center of your head, down with your teketana (blade of your hand). A very powerful movement, generated from your hips and what follows is the hand. [Looking at the way shomenuchi and yokemuchi work, it’s easy to see how the foot moves first and lands first, followed by a hip movement and then the torse, and then the arm. This would make it a safe bet to assume that energy comes from the foot and moves up the body, however the initialisation of the the foot movement is generated from the center, as a movement from the hip.] If you stop this strike while it’s just starting, the energy is too far back for the correct muscle fibres to be activated, and as such there is no power behind the attack — as well as if you catch it early enough there will be another part of the body moving and therefore no body-weight will be behind the attack. Once the arm has moved past a certain point, the energy is too far along, the body has moved too much and you literally have power behind your attack due to the time it’s taken to get there.

If you stop the attack early, the muscle fibers which are used to make that attack work aren’t activated yet, and there is also no body weight behind it.

Final Words: Once you have discovered and practiced this enough, you can time your interception at such a point that the energy will not be far enough to impact you, but will still be moving through your opponent’s body to give him or her the momentum required for doing the attack.