Pain – all part of the process? 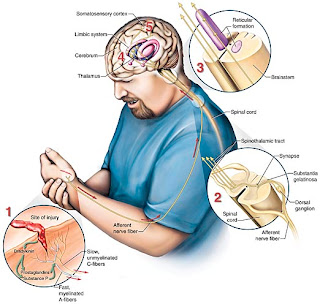 Pain. A part of daily life, and “acute pain” (short term immediate rather than long term “chronic pain”) is something we all experience at some time or another during our martial arts training.

Let’s start by having a quick look at how and why we “get hurt”.

Though we are not consciously aware of the process, the experience of pain involves a complex sequence of biochemical and electrical processes beginning with tissue damage, followed by transduction, transmission, perception, and modulation.

Basically – depending on the type of injury (tissue, abdominal, skeletal, nervous system etc) a chemical reaction is caused which kicks the brain into action to stop us doing whatever it is that is causing damage.

Now, for the martial artist, this presents a problem. In most martial arts systems, especially the grappling-based ones, regular practice involves the application of some form of pain or discomfort as a defensive strategy – we are all familiar with the “tap when it hurts” routine I’m sure.

As Aikidoka, we are supposed to be promoting universal reconcilliation and love, and following the most natural path; If one of our core physiological systems consistently tells us that “hurting is bad”, then surely doling out nikkyo’s like there is no tommorrow is contrary to those goals?

Some styles of Aikido (including many of the “Ki” focussed systems) indeed have rejected the firm application of many traditional techniques.

There is of course an opposing view that would argue as long as practice is controlled and correctly motivated, no-one should get actually “hurt”, and that the “discomfort” is all part of the martial process – after all, if a defence technique is reliant upon a certain amount of pain to function, then to practice this so gently as to be non-functional would be pointless.

To be put in a position where one has to defend oneself, we are assuming two things; an attack and a high likelihood of pain. Aikido principles of “Concentration on the Centre’, “Relaxation” and “Extention of ki” rely heavily on being able to maintain calmness and unflappability when confronted with these situations.

If you suddenly get a punch on the nose from out of the blue, no matter how genuinely you love your fellow man or wish for worldwide unification, it’ll still bloody hurt! Then the bodies natural processes kick in, the chemicals start rushing around and the brain says “OUCH! I’m outta here” and we enter our perfectly natural fight-or-flight reaction.

All of which makes it very difficult to maintain the classic Aikido “unified mind, body and spirit”.

So how do you prepare students for this?

Some of the more “percussive” martial arts put great import upon “conditioning” and seems to spend hour bashing the living daylights out of themselves in an attempt to build up callouses and resistance to pain. Admittedly, these styles turn out some very tough fighters, but also produce ex-students riddled with arthritis who age before their time.

My feeling is that there has to be a sensible middle ground, where the bodies “natural” reaction to pain can be studied and utilised to not only improve us as martial artists, but also increase our own self-awareness.

I was lucky enough to have started my training at the age of about 9 or 10 at a “traditional” dojo, with fairly rigorous practice and excellent instructors. Even the kids classes, although very safely structured, used the same straw tatami mats as the adults (which needless to say were pretty unforgiving) but after a few weeks most students got accustomed to rolling on them and settled down without a problem.

I can clearly remember the first time I ever received ai-hamni nikkyo (the “bird having a drink” technique as it was taught to us kids back then..). I dropped to the floor and yelped, even though the little girl I was training with was by no means being rough. Sure enough, once this happened a few dozen times, and I started to relax and understood that yep, it was uncomfortable, but I wasn’t going to die, my mind and body started to process of “re-aligning” the pain, so that although it was acknowledged, it didn’t cause a system-wide panic, and I was able to carry on with my practice.

So should be be paying closer attention to this?

I can draw on many examples outside the dojo to back up this theory. A few years back my body decided to become diabetic, and the first few injections I had to give myself were painful and traumatic. Three years on; if I fancy a biscuit, I pop out of site, jab myself and carry on – sometime with three meals a day and snack this can mean 5 or 6 jabs a day. To be honest, it really isn’t a big deal now, just something that is part of my life, but there was a measureable period of adaptation whilst my brain got used to the discomfort. I can refence several other instances where inital “mild” pain or discomfort fade into routine with familiarity.

If the body can deliver a solution, surely we should listen to it? Isn’t this “being natural”? If one day someone, for whatever reason (maybe they just don’t like my style of writing…) decides to punch me on the nose, I hope that years of training, with the occasional accidental bang on the nose, over-enthusiastic wrist-twist and slighty-harder-than-it-needed-to-be throw will mean that my mind, body and spirit will say “that hurt, but don’t panic”, and there will be a chance for a resolution of the situation which avoids any further discomfort for either participant.