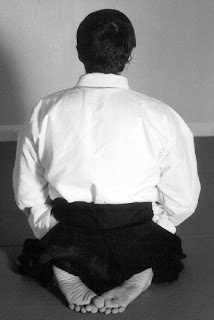 
Seiza is one of the most commonly used sitting postures in Japanese martial arts, with students assuming this posture at the beginning and end of practise sessions for formal bow, meditation etc. Aikido, in particular, makes use of seiza to teach basic movements, with technique being performed “on the knees” (Suwari-waza) and many Iai schools use seiza as a basis for basic forms.

The word seiza is written with two Chinese characters; “sei” meaning “correct, proper, true” (and by itself can be pronounced tadashii, meaning “just right” or “appropriate”) and “za” meaning “sitting posture” (written with an ideograph that looks like people sitting on a raised floor under a roof).


In Japanese culture, sitting in seiza (kneeling, sitting on one’s ankles) is the most correct, beautiful, and “proper” formal sitting posture, especially when seated indoors (usually on tatami matting).

Many people complain that seiza makes their feet “go to sleep” (known in Japan as “shibireru”) but this tends to be from lack of proper exercise, weak leg muscles and poor circulation; not necessarily due to the position of sitting in seiza. If one is sitting correctly, one should be able to perform seiza for anything up to an hour a day without discomfort.

Proper seiza, helps to naturally align your body and spinal column, focusses on your “centre” and leads to an alert mind and body – hence its common use in meditation.

Different schools of martial arts may have slightly different versions of seiza, but for a rough guideline, sit in seiza as follows: 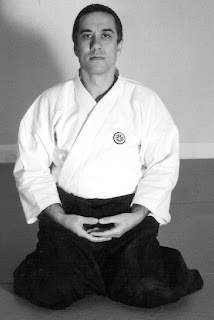 • Sit kneeling with your legs folded under you, with the left big toe on top of the other.

• The knees are about one to two fists apart .
• Sit with back up straight, but in a relaxed posture.
• Rest your hands naturally in your lap.
Thanks for taking the time to read this blog, and I hope it makes you want to find out more about Aikido
www.aikido4beginners.co.uk