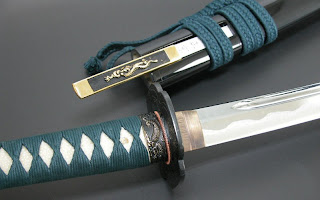 Tantodori in Aikido
Posted by Autrelle Holland on April 10th, 2007

Nowadays, it is pretty much understood by most that Aikido is a weapons based art. The techniques in Aikido were developed from Aikijujutsu, a highly sophisticated art based on movements from kenjutsu. Aikijujutsu includes practice while armed with the long and short sword, as as well as the tanto. Defenses included attacks from single and multiple attackers, armed or unarmed. How this translates to Aikido practice today will vary according to the style of the instructor. Some instructors study koryu such as Iaijutsu or Iaido, Kenjutsu or Kendo, Jojutsu or Jodo, and so on. As most Aikido bukiwaza do not come from a strict syllabus handed down by Morihei Ueshiba (Saito’s bukiwaza being perhaps a most notable example), most aikidoka take to outsourcing to learn proper handling of the weapons used in Aikido’s weapons techniques.

Whether or not training in the bukiwaza in Aikido will make a practitioner as skillful with the use of a ken (or bokken) or jo has been a matter of debate, especially since the general consensus is that in Aikido, weapons training is designed to inform and improve elements of unarmed practice. One of the things that changes is the element of space, commonly referred to as maai. Another factor that changes is that while precision and timing are needed to do perform both armed and unarmed techniques, you don’t need strength to do weapons techniques. By that I mean that quite frankly, there’s no such thing as being “stronger” than someone who is swinging a machete or a baseball bat at you. This feeling of using correct technique and not muscular strength is supposed to carry over in one’s unarmed technique as well. Now we have have enough of an idea of what we learn from most Aikdo bukiwaza to get into the subject of this writing: what is it that we are learning when studying tantodori in Aikido?

“We are learning how to apply Aikido techniques when uke uses a dagger.” I used to think that also. These days I’m not so sure. In most dojo that I have seen, tantodori takes shape tsuki kotegaeshi, tsuki rokkyo, tsuki gokyo, yokomenuchi gokyo, and ushiro kotegaeshi. Of course you see a few kansetsuwaza thrown in as well. That was fine for me in the beginning. But I realize now that there are two basic flaws in the way that tantodori is usually taught: they don’t take into account the way a person committed to cutting you would attack you, and they don’t take into account the way a person committed to not being cut would defend themselves. In Aikido, most tantodori is conducted with uke performing tsuki, shomengiri, yokomen or kesagiri while holding a wooden tanto. While these are common vectors that any attack may come from, they do not represent a sincere attack given the nature of the knife. An attack with the knife is all over the place. Slashing and thrusting in rapid succession is perhaps the most basic handling of the knife. Training to fight someone when armed with a knife is a most serious business, much more than an all-or-nothing, vector-based, yokomen or tsuki. The person with a knife knows that if their attack fails, that they will most likely be justifiably killed.

A person armed with a weapon also knows that any target is a good target. There are preferred targets for sure, but cutting someone is cutting someone, hitting someone with a baseball bat is hitting someone with a baseball bat. A knife fighter will not obsess with a perfect slash to the neck or a thrust to the sternum, when a slash or stab to any other target is available. This brings me to my second point. Usually in tantodori, nage, in performing the said technique, exposes the most desirable targets to a knife fighter. My favorite example is yokomenuchi gokyu ura. In this example, imagine that uke attacks with the knife in the right hand (however the blade is gripped is unimportant). Here, the usual case is that nage will enter strongly, at an oblique angle toward uke. Then nage will simultaneously use a left hand tegatana strike to uke’s knife-wielding arm at the elbow, while delivering a right hand atemi to uke’s face. From here, nage applies the gokyo or what have you. There are several problems here that arise because it is a knife attack, and not an unarmed attack, that gokyo, performed as usual, does not address.
In theory, nage stopping the arm at the elbow will prevent uke from slashing the face and neck. But it does not prevent uke from slashing the inner and outer parts of the forearm. Some people think that you can take a stab or a slash to the outer section of the forearm and still continue, since the major blood vessels won’t be cut, and the muscle groups found there, if cut, will still permit you to make a fist or hold a weapon. I don’t really believe that. I’ve seen some of the knives that most people carry everyday (heck, I’ve seen the knives that I carry everyday!), and I’ve seen the things that people pick up and use as improvised slashing and thrusting implements. These things will cut you down to the BONE.
You will bleed out, simple as that. If you don’t freak out first. There will be no footwork, no timing, and if you’re lucky, you’ll have seconds to do something really crafty before you pass out from this arm slash. Blocking a knife in this manner also does not prevent uke from bending his knees to lower his level and slash or stab at your torso. You can try to block this with your arms, which uke should happily slash and stab. Now, I can accept that this entry should be consider kihonwaza, and not an end in itself but a way to learn the basic idea of gokyo, but I have to ask where the actual application comes in. I have to wonder if these methods are taught as basic framework, with the applications to be taught later, or if I’m simply practicing unsound knife defense for the sake of what an Aikido technique is supposed to be?

“Aikido is a traditional art and the tantodori are traditional methods preserved in our modern practice.” This is something I can buy into, but it begs the obvious question: what tradition? First, a confession: when I decided that the knife was my preferred tool to always have on me in case of dire emergency, I didn’t consult my Aikido sensei about it — I started practicing with a Filipino style knife artist. Every teacher of Aikido I know knows tantodori, but none of the ones that I know study knife fighting (another confession: I don’t get out too much. I am not putting anyone down here because of my lack of knowledge or resource). I have never been made aware of a ryu of knife fighting that has influenced the role of uke or nage in Aikido. If such a thing exists, I would love to be in the know. This is a surprise to me, since a lot of emphasis is given to learning the proper handling of sword and staff, but not so much, if at all with the knife. There are no solo practices with the knife. There are no partner practices where each partner has a knife. I’m not sure if this is an expression of the philosophy and attitude toward using the knife in Aikido, or if it is matter of the content of the technical syllabus. If our tantodori comes from a traditional manner of handling the knife, I would simply like to know what that tradition is. A part of me wants to think that we are learning to apply the same careful feeling of sword-taking, but at a closer distance, but I can’t make myself buy into that.